We can not wait for you to come and play a game or two with us once more!

Join the new step at The Month of Games, watch  the strategies from The White Queen and The Black King over 64 squares, and enjoy one of the most exciting games in the world, CHESS:

The White Queen
Living and dancing among her people in the cloud kingdom of light may seem meek and mild. Do not be fooled by her sweet and mercurial nature for those foolish enough to threaten her kingdom and her crown will be struck down as she attacks from all sides.
MODEL: Seashell Dench

The Black King:
Sets out from his dark castle intent on conquering the far off fairy kingdom of the White Queen and her consort. Caught in an epic battle the power struggles between the dark side and the light. An intricate dance of cunning moves will see who will come out on top. Only time will tell which side will prevail.
MODEL: Boniefacio Resident

To see what threatens her kingdom and watch her do battle in the royal battle join AIM & Siren Productions July 19th, 2014 at 12pm & 5pm SL on The Month of Games

THE MONTH OF GAMES Media Partners:

WE LOVE TO BLOG 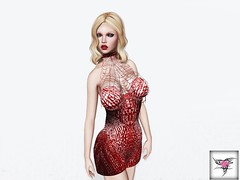 Second Life® and Linden Lab® are registered trademarks of Linden Research, Inc. All rights reserved. No infringement is intended.
%d bloggers like this: